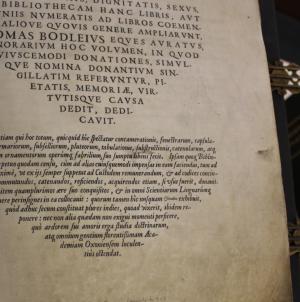 In this first post we’ll be introducing the broad aims of the project and the team behind it. Because we’re keen to use the blog series to highlight our methodologies as well as our research finds, this post will also mention some of the questions that we've been working through over the first months of the project as we work out our approach. These are discussions that we’ll be developing as we move through the project, so expect more detail on that in blog posts to come.

But first, an introduction to the project itself. At its core, Shaping Scholarship is a study of gift giving to the Bodleian Library in the first twenty years following its refoundation, c. 1600–1620. Focussing in on this slice of library history gives us an opportunity to carry out the detailed, painstaking analysis which can, conversely, lead to broader insights into cultures of library building and philanthropic networks in early modern England.

The project takes advantage of the rich early institutional archives of the Bodleian that were produced, often self-consciously, by Thomas Bodley and first librarian Thomas James. In particular, the first volume of the Benefactors’ Register of donations to the Bodleian Library is a cornerstone of our research. So too are the many books still held on the shelves and in the stores of the Bodleian today which were acquired through these earliest gifts. Later on in the project, we’ll be turning to the archival material of donors dispersed around county record offices, unpicking their connections to each other and the Bodleian, and examining the sources of the wealth that allowed them to influence library formation.

These archival and rare books sources will provide the data for the digital methods we’ll be employing on the project. One of these is the construction of a database linking donation record, physical book, and donor. The other will come in the form of network analysis of the donors, tying into Six Degrees of Francis Bacon. Whilst a pilot project has shown that we can expect these tools to give us real insight into the mechanics of book donation, an aim of the project is also to build digital resources for a wider scholarly community in and outside of traditional academia. Copy-specific information we gather from Bodleian books will be fed into the Bodleian’s online SOLO catalogue, and the database will become publicly available at the end of the project.

Our own research questions for the project come out of the connections between networks of people and (unstable) assemblies of books and objects in early modern England. How did benefactors use library donation to cement, manipulate, and position themselves within their networks and within cultures of philanthropy? How, in turn, did these networks of people, and the cultures and economies within which they operated, shape the resources available for scholars in what would soon become England’s pre-eminent national public library, interacting with the designs and practices of Bodley and James?

So, what progress have we made? The first stage of our project is well under way, although we are some way off from attempting to answer our big research questions! At the moment, we are occupied with constructing and populating the database of donations, books, and donors. We have been making key decisions about its design bearing in mind our research aims, the database’s future usability, and, of course, the practical constraints of the project. To none of our surprises, the refusal of early print to constrain itself within fixed book units (“is this one book or four?”) has been at the root of some of our lengthier discussions! It’s proving to be an ongoing process, and the database design is certainly being put to the test by some of the unexpected data the Benefactors' Register is throwing at us. We’re looking forward to sharing some of that process here over the coming months. In the longer term, we’re also planning to talk about any intriguing finds that can help explore the project’s research questions and to report on our planned events.

Dr Robyn Adams (PI)
Robyn is a Senior Research Associate at the UCL Centre for Editing Lives and Letters (CELL) and PI of the ‘Shaping Scholarship: Early Donations to the Bodleian Library’ project. This has grown out of a decade of research which focuses on the Library Records at the Bodleian, and the exchange of books in the early modern period. Her broader research interests lie in the formation of libraries, epistolary networks and archive studies.

Dr Matthew Symonds (Co-I)
Matt is also a Senior Research Associate at CELL. He is CELL’s Technical Research Director, responsible for the digital infrastructure of the Centre’s projects. His scholarly interests are on the use of early modern books, marginalia, and the links between private and public libraries and the intellectual projects of early modern scholars.

Dr Anna-Lujz Gilbert (PDRA)
Anna was awarded her PhD from the University of Exeter in early 2022. Her project, ‘Public Books in Provincial Towns’, used surviving ‘parish’ library collections to uncover practices of donating, collecting, and using books in early modern Devon. Leading on from this, she is interested in the national movements of library provision that flourished in early modern England, and the assemblages of people and books that constituted them.

We’re delighted that we’ll also be working the Bodleian over the course of this project.