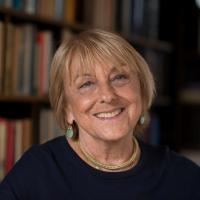 Lisa Jardine CBE FRS was Professor of Renaissance Studies at University College London and Director of the Centre for Editing Lives and Letters, as well as the UCL Centre for Humanities Interdisciplinary Research Projects. She was a Fellow of the Royal Society, a Fellow of the Royal Historical Society and an Honorary Fellow of King's College, Cambridge and Jesus College, Cambridge. She held honorary doctorates of Letters from the University of St Andrews, Sheffield Hallam University and the Open University, and an honorary doctorate of Science from the University of Aberdeen.

She was a Trustee of the V&A Museum for eight years, and was for five years a member of the Council of the Royal Institution in London. She was Patron of the Archives & Records Association and the Orange Prize. For the academic year 2007-8 she was seconded to the Royal Society in London as Expert Advisor to its Collections. From 2008 to 2014 she served as Chair of the Human Fertilisation and Embryology Authority – the UK government regulator for assisted reproduction. In December 2011 she was appointed a Director of The National Archives. In November 2011 she was appointed an Honorary Bencher of the Honourable Society of the Middle Temple. In 2013-14 she served as President of the British Science Association, which in 2012 made her an Honorary Fellow. In 2015, she was to her great delight elected a Fellow of the Royal Society of London.

Lisa Jardine published over fifty scholarly articles in refereed journals and books, and seventeen full-length books, both for an academic and for a general readership, a number of them in co-authorship with others. She was the author of several best-selling general books, including Worldly Goods: A New History of the Renaissance, Ingenious Pursuits: Building the Scientific Revolution, and biographies of Sir Christopher Wren and Robert Hooke. Her book on Anglo-Dutch reciprocal influence in the seventeenth century, entitled Going Dutch: How England Plundered Holland's Glory, published by HarperCollins UK in 2008 and HarperCollins USA in 2009 won the prestigious Cundill International Prize in History. Her last book, a collection of essays entitled Temptation in the Archives, was published by UCL Press as a freely available open access book.