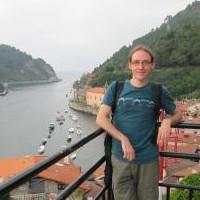 Sam is a PhD student at the University of Helsinki. His research focuses on Early Modern English merchants' correspondence, and he is interested in the intertwining of networks of commerce, intelligence and patronage, and in international merchant communities from a multicultural and multilingual perspective. His PhD thesis is an account of the life and career and a digital edition of the early letters of Richard Cocks, English merchant. Cocks is known for having been the head of the English East India Company (EIC) trading post in Japan (1613–1623), but between 1603 and 1608 Cocks lived at Bayonne in France and was part of the intelligence network of Robert Cecil.

Sam is a member of the Research Unit for Variation, Contacts and Change in English (VARIENG) at the University of Helsinki, a Centre of Excellence for English historical and corpus linguistics. Visit his webpage there and his Google Sites website for more on his research activities. Sam was a CELL Visiting Scholar in 2007, and again in 2010.