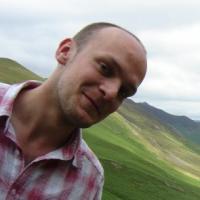 Pete read English at Oxford University from 2001 to 2005 before taking the CELL MA in Renaissance and Early Modern Studies in 2008-9. His PhD thesis, supervised by Jerry Brotton and Lisa Jardine, is titled "The Centre of the Muniment: the India Office Records and the Historiography of Early Modern Empire, 1875-1891", and deals with the early records of the East India Company, the knowledge-producing networks of the late nineteenth-century imperial establishment, and how the latter made use of the former.