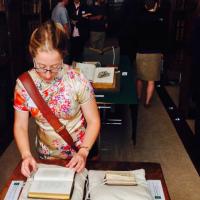 After a PhD that retraced the intellectual biography of religious explorer George Keith (1639-1716), at Université Paris-Diderot, under the supervision of Prof. Robert Mankin, Louisiane Ferlier taught at Oriel College and Jesus College, Oxford and pursued research on early modern collections in the libraries of Oxford. She joined the Centre for Editing Lives and Letters, at UCL in September 2013, as Research Associate.

Louisiane is interested in the circulation of ideas in the British world in the early modern period. She works more particularly on the ways books and pamphlets were made, transported, acquired, used and abused in specific places (Bodleian Library), within specific networks (Society of Friends - Quakers) or by some individuals (George Keith, 1639-1716, John Wallis, 1616-1703, Benjamin Franklin, 1706-1790 ).