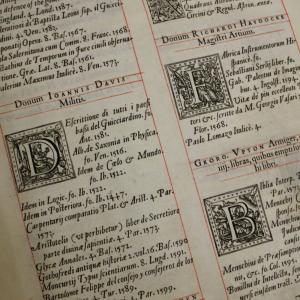 This AHRC-funded 3-year project seeks to uncover the stories behind the books on the shelves at the Bodleian Library, Oxford. Our focus is on the first two decades following its seventeenth-century refurbishment by Sir Thomas Bodley (c.1600-1620), and the study examines the shape of the collection of the books donated and purchased with funds, the social backgrounds of the c.220 donors, and how these men and women were connected across the social compass of the time.

Far from being simply a study of book-history, the project is multidisciplinary, drawing on the fields of literary studies, network analysis, political, economic, social and intellectual history, library and information studies and more. Using the overlooked and under-used records of one of England's principal research libraries, we will explore the relationships between people, things and places, giving a broader sense of philanthropy, book-ownership, and social connectedness in Jacobean England. While many of the donors are well-known historical figures, a greater number have been omitted from the conventionally rehearsed narrative, and these include scholars, merchants, soldiers, women and diplomats. It is this corpus we intend to examine, to reconstruct the landscape of gift-giving and exchange which had Bodley, and/or Oxford, as its philanthropical centre and focus.

The project aims to construct a prosopography of the donors to the Library in order to examine this historical group who share the characteristic of donating money or bibliographical items (books, manuscripts, library objects), giving a sense of the shape of the personal collections entering an institution, the scholarly potential of the collections in the first few years, and give a clearer view of the program of accession performed by Bodley and his First Librarian Thomas James. We will capture biographical and bibliographical data located within the records of the Bodleian and local record offices and we will map and visualise the networks of donors and their books using digital methods. Data gathered from the survey of donated books will be added to the Bodleian Library Catalogue (SOLO). We will disseminate our project findings on both digital and printed platforms through this digital platforms, as well as printed articles. Look out for the CELL team sharing our discoveries at conferences and symposia as well blog posts and news items. In addition, we plan to provide resources to incorporate elements of book history into the KS3 & KS4 classroom through digital educational tools.

We have designed the project to reach and be of benefit to a wide scholarly, professional and public community. Lying in the interstices of so many disciplinary strands, the study has the potential to reveal information about book-owners and cash-donors, as well as a clearer picture of the early population of the Bodleian's shelves. The addition of provenance information to the Bodleian catalogue will be of immediate benefit to scholars researching the personal collections of individuals and groups, as well of being of benefit to the antiquarian bookseller and auction community. A study of the economic status of donors will provide clues to the 'sources of wealth behind the shelf', a key research theme in the project to explore how colonial and commercial expansion and growth of wealth in the period was reflected in philanthropic gestures and social positioning. The Bodleian Library itself is a Collaborating Institution, particularly through its Centre for the Study of the Book; this partnership will be developed into a key public engagement strand onsite at the Bodleian to explore the economy of knowledge in an attempt to reveal the 'hidden histories' of the donors. One of the main drivers of the project is to assemble a network analysis of donors allowing an examination of the relationships between the historical group of people, in line with recent research methodology in the conjunction between archival research and the digital humanities.